The following are events or activities that happen in Mayberry that are not as they should be. They are pointed out not in an attempt to tear apart "our home town" but because we love the show so much that we have studied each episode and have become "trained noticers."

When Andy is talking to George about leaving for Texas, Andy is laying on the couch looking toward George who has the kitchen door wall behind him. Suddenly the double doors from the other side of the room are behind George when he says, "It ain't?" (time 18:33) then there's a cut and George is back where he should be. George then walks behind the couch around past the fireplace and then where the double doors are behind him from Andy's view. Andy "Too bad that ain't cowboy rations" and THEN Tex says, "It ain't?" (time 19:49) exactly the same as he had said in the shot just about one minute before. The first occurrence is also a "reversed" image of the second shot. 1

Andy and the Gentleman Crook

While waiting for the arrival of Gentleman Dan, Barney works to clean the courthouse. Somehow, during all the cleaning, Barney's badge begins to come and go from his uniform. It first leaves as Barney goes into the back room just before Dan arrives at the courthouse (time 8:27) and remains gone until he leaves the back room (time 8:51). Barney's badge stays put until he has locked up Mr. Caldwell and begins to talk to him through the bars of the jail cell (time 11:01) and asks for an autograph. The badge returns as Barney finishes his conversation with Dan (time12:04) and it isn't until later in the episode when Dan steals Barney's gun and it about to make a get away (time 21:02). It's hard to see the badge missing while Barney is still standing inside the cell but when he exits (time 21:31) it is very easy to see. Finally Barney's badge returns (time 22:44) and remains. 1

A Plaque for Mayberry

Andy and Opie walk into the courthouse. Andy is saying "I wonder where Barney's been all morning" and closing the door notice the hand (time 9:36) from outside the courthouse door reaching to take the exterior door handle to make sure the door closes and does not bounce back open. Watch the [YouTube video] to see this in action.1 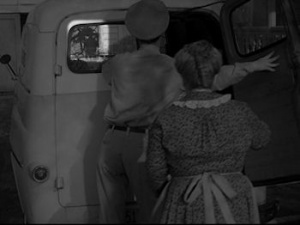 Aunt Bee is keeping Otis at the Taylor home because the cells at the courthouse are full. Otis tries to escape by hiding in a laundry truck. As Aunt Bee and the driver run around behind the laundry van to open the door, if you look in the drivers side rear door window you can see the reflection of a "boom mic" in the window. (time 19:44) About 10 seconds later (time 19:53) you can see in the passenger side door window, as Aunt Bee is hitting Otis with the broom, the reflection of the driver and behind him what appears to be the sound man that is holding that boom mic. Watch the [YouTube video] to see this in action.2

When Barney dresses up like a woman, he has on one dress as he steps outside the door to the courthouse (time 17:53) and another on the streets of Mayberry (time 18:14). Notice the pattern of the dresses. The first has small light color pattern on a dark background and the second has a much more busy light color pattern on a dark, but lighter than the first, background. The second dress is seen in all future scenes in which Barney is dressed as a woman.2

In this episode, both Barney (time 0:52) and later Andy (time 6:10) arrive to speak with the truck farmers and ask them to leave. In both cases, the Mayberry squad car is parked by it's driver (Barney then Andy) at an angle to the road but when they get out of the car it is parked parallel to the road.3

After speaking with the truck farmers, Andy returns to the courthouse. As he enters the courthouse door you can see the squad car through the open door (time 10:20). Take careful note and you will see that it is not a "real" car but is a flat, possibly wooden, painted version of the squad car.3

When Barney goes back to confront the truck farmers (time 11:53) the car is parked again at an angle then straightens. If you look very closely in the scene behind the two farmers who are watching Barney from behind their truck you will see a building in the far background. In front of that building you will see a man (time 12:10 it begins and repeats several times before time 12:31) who appears to be working with something on the ground.3

The Darlings are Coming

The Darlings are Coming - Episode #88 (aired)

As Mr. Darling is adding water to the Darling's truck radiator you see Sheriff Taylor coming around from behind the truck on the drivers side. Look closely at Andy's left leg and you will be able to see the microphone cable coming from the bottom of his pant leg dragging behind him as he walks. (time 1:15-1:17).3

A Black Day for Mayberry

One of the two FBI men changes but only in one 2 second part of the episode (time 1:53-1:53) as Opie walks by them in the courthouse. Rance Howard, Ron Howard's dad, is the missing agent. 4

When Barney pulls Gomer over for making an illegal u-turn and gets out of the squad car (time 4:11), the light on the car is turned off. The long conversation with Gomer about u-turns goes along with the crowd watching until Barney finishes lecturing Gomer and returns to the squad car (time 6:40) and we see that the beacon is on.4

1Times from season one DVD.