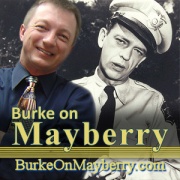 The living in Mayberry should be easy and slow but even in Mayberry folks listened to the radio. Podcasts are almost like radio and Mayberry.com had sound clips and cast interviews online since the 1990’s so in 2008 it was time to join the world of podcasting. Two Chairs No Waiting is about The Andy Griffith Show and all things Mayberry. Episodes contain interviews, Q&A sessions and other items of interest to Mayberry fans.