Little is known about this charming lady. She has been referred to by fans a "Nice Dress Nellie" because in the episode that Barney arrests the whole town, "Andy Saves Barney's Morale" as she is released from jail with the crowd, Andy acknowledges her and comments "Nice Dress, Nellie."

Fans should recognize her face as she appears as a background actress in over 30 episodes from first season, all the way to the last. Trained Noticers believe that her voice is heard in Episode 92, "A Wife for Andy" The picture to the right of this article is from that episode as she arrives with the other ladies. As she is leaving the second time, one of the ladies says something like "I wonder what this is about" and she says "I wish I knew"

She is always wearing a dress, often has on white earrings. In the color episodes such as "Only a Rose" (when she is a judge) you can see a few streaks of gray in her hair. Watch for her. She's everywhere! Just like Mr. Schwamp and Tom Jacobs.

Assistant director Bruce Bilson told fans during a presentation at Mayberry Days 2015 that her name was Marvel, but he did not give her full name nor indicate if that was a first or last name. Marvel was a stand in for Don Knotts and Mr. Bilson picked her for the stand in job. TAGS fan Randy Turner later confirmed that "Marvel" was her First name, not her last. She was seen over and over throughout The Andy Griffith Show series. This from a clip shot by TAGS fan Tim Bradshaw during Mayberry Days 2015

Tracking Down Her True Name

Contributor to the iMayberryCommunity "Bobby" posted the following on July 24, 2020:

I think her name is probably Marvel Lawrence.

I saw a comment on a MeTV article about Nice Dress Nellie where a poster named Jermyn said "I searched IMDB for someone named "Marvel" (first or last) and the only possible one I came up with was a "Marvel Lawrence" who was an actress with one credit for appearing as a store clerk in The Danny Thomas Show (a.k.a. Make Room for Daddy) in 1961 in Season 9, Episode 3, Love Letters."

Given the connections between Andy Griffith and the Danny Thomas Show, I decided to do some research. I then found this Dec. 31, 1965 Article (you have to download the pdf) in the Alpine Sun (Alpine, CA) about Floyd where he said "Marvel Lawrence, who stands in for me, is the foster daugher of Eltinge." (page 14) He is talking about Julian Eltinge. Also note how he said that Marvel was his stand-in like how Bilson did in my first paragraph.

At these two links (1) (2), people noted that they had seen Nice Dress Nellie on The Bob Newhart Show. I then found this June 30, 1974 Article in the San Bernardino County Sun that said "The Bob Newhart Show" wrapped for the season on Friday with a mood of sadness permeating the set." "The husband of Marvel Lawrence (stand-in for co-star Marcia Wallace) died on Tuesday". You have to click "Show page 47 article text" to see it. 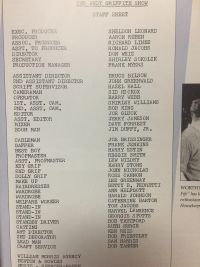 A second contributor at the iMayberryCommunity, "Bernie Fife," found a "call sheet" from season one of The Andy Griffith Show that listed Marvel Lawrence as a stand-in. This gave written evidence of her name and cleared the case of "Nice Dress Nellie" and her true idenity.